The Day Of The Doctor – A Poem

We’ve patiently waited and now it’s here
It’s the day of the doctor, 50 years
Of timey wimey travels and fun
And oh what a lot this clever chap’s done.

With his trusty companions, he saves the day
With eleven different faces along the way.
It went Hartnell, Troughton, Pertwee, Baker
Peter Davidson and then Colin Baker
McCoy, McGann, Ecclestone, Tennant
With Matt Smith now playing the Doctor at present.
Every true Whovian has a favourite or best
And Peter Capaldi’s lined up as the next
But I’ve trickled off track – I’m just so exited
It’s the day of the Doctor, and we’ve all been invited.
Doctor Who fans around the world unite
As the anniversary special lands tonight.

We’ll be watching in cinemas, and watching at home
Listening for the TARDIS with it’s asthmatic groan
Who is John Hurt’s Doctor and what will he be?
Not long to go and at last we shall see.

So finally a nod to the British Broadcasting Corporation
And Steven Moffat and the team. Thank you for your dedication
It’s been half century and it’s all down to you!
Happy 50th anniversary and long live Doctor Who!

This poem was written by Ms Moem, in celebration of the 50th Anniversary of Doctor Who. The Day Of The Doctor airs tonight on a screen near you! 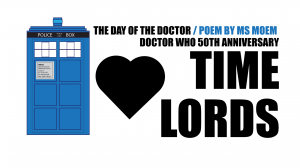