Tonight I had the pleasure of my very first comedy gig
And delighted to say I cut my teeth on the North-West’s Mr Big.
Now that’s not me being personal, he’s a celebrity comedy act
So when I call him Mr Big, I am just stating a well known fact!

Yes, it was Mr Jason Manford, who’d chosen Kendal’s Brewery Arts
As the ideal place to warm up, before his main tour starts.
He was born and bred in Manchester, so he’d not had far to come
Bringing with him a cheeky smile and a proper northern sense of fun.

Now the poor chap had the sniffles, but he soldiered bravely through;
The show’s called First World Problems (a little irony for you)
But I have to say, it’s worth a watch, and after seeing him on TV
To get to watch him in the flesh, was like going into HD.

His observational humour, is well thought and on the money
And his unscripted audience banter, is very quick and terribly funny.
This night was sold out months ago, so I had high hopes & expectations
And you’ll be pleased to know he delivered an evening of Great British titillation!

Just a microphone, a stage and Mr Manford; who could ask for anything else?
He needs no bells and whistles, as the comedy speaks for itself.
It was great that he came to Kendal, and I really enjoyed the show.
If he comes to a venue near you, then I wholly recommend that you go!

So, I was thrilled to get to meet him, and he seems a lovely man
Who made time to pose for pictures and interact with his fans.
He really is hilarious, so I’m happy to give a glowing review
And whilst I am still beaming, Jason, a great big thanks to you! 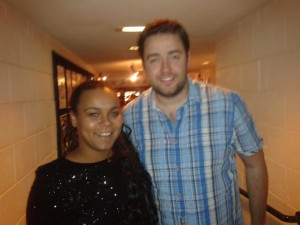 This is my review of Jason Manford’s First World Problems Tour. You should definitely see it!

To find out if Jason Manford will indeed be performing his First World Problems tour at a venue near you, please visit his website. www.jasonmanford.com/