How can anyone expect world changes
from the senseless murders of strangers.
Strangers to us and strangers to their killers,
yet we all bear the scars and danger dances within us.

Contempt and distrust rise triumphant from the dust.

Not a single drop of blood spilled is necessary or just.

And yet it goes on. An eye for an eye, a bomb for a bomb.
People flee from their countries and the war rages on.

And for what? What’s it solving?
Stuck in a loop, a door revolving,
revolvers handed to misguided fighters
to intimidate and destroy, to decimate and incite us
to respond.

With yet more bombs.

Who started what is not the focus that matters
but endless retaliation leaves families in tatters.
Towns turn to rubble, hope turns to horror,
today turns to terror, what’s left for tomorrow?

It is a hollow sort of victory
that sees those written down in history
only have their notoriety
because of the hurt they caused society.

And what’s it for?
No-one ever wins a war.

It doesn’t bring freedom, or friendship, and more
it doesn’t unite communities or legitimise a cause.

No, no-one ever wins a war. 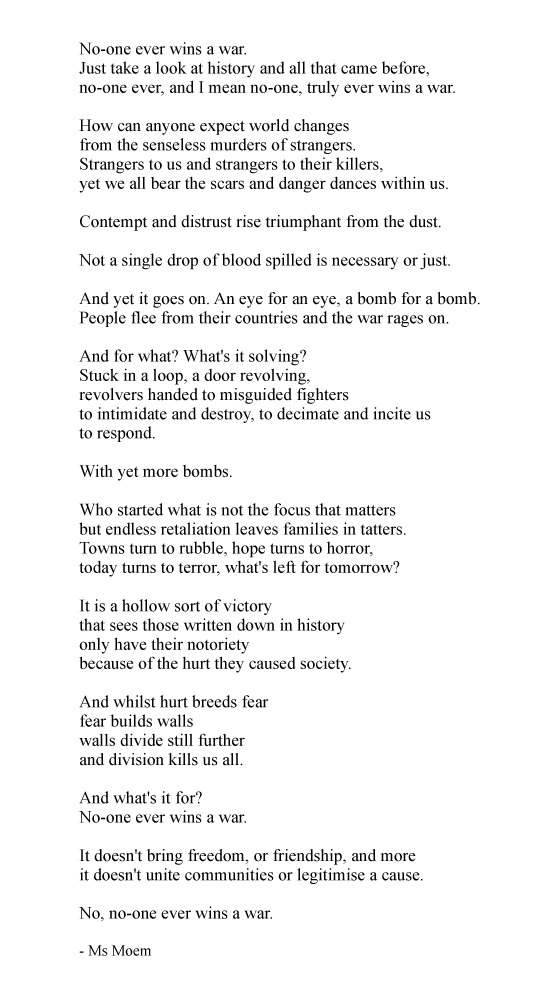