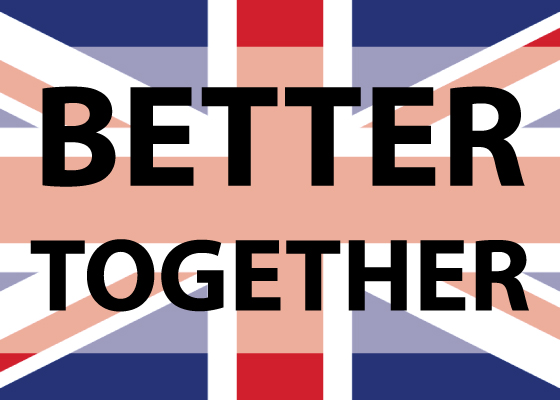 So, Scotland voted NO to independence. It would seem that the majority of the eligible voters believe we are better together, and I whole-heartedly agree.

The Scottish referendum has been a bit of a funny beast for those not in Scotland. It kind of felt like when your parents are having a tough time, and as a child, you don’t really know what’s going on but you know ‘something’ is happening. You might hear a bit of shouting or a few slammed doors, or you might witness your parents giving each other the silent treatment, but you figure they’ll get over it, and it’s not really any of your business.

However, as a citizen of the United Kingdom, but living in England it kind of was our business whether Scotland wanted to cut ties and go it alone. However, no-one outside of Scotland seemed to be having any debate about it, as it wasn’t our conversation to have. Then over the last few days, the conversation came. People who hadn’t expressed opinions about it before suddenly felt that they could have a say, even if they didn’t have a vote.

I sat up through the night watching the results come in after making the mistake of having a ‘quick check’ of the news before bed. The first ones were just coming in. They were nos. In fact the first 5 were nos.

Then Dundee came in with a yes. Because this was a larger area than most of the previous ones put together, the overall percentage of no to yes votes swung from roughly 57% NO to only 50.1% NO. That was the first time that I actually thought, oh flip, they really might vote to leave. What would it mean for our smaller United Kingdom if they did go? Another yes vote followed. Even on the news, the presenters also seemed to be approaching it with less certainty than the earlier results had suggested.

And this was all without the reports of suspected electoral fraud thrown into the mix.

An historic vote, drama, and live reaction via Sky News, BBC one and Twitter.

I was hooked. It was great to hear reports of an average of 84% of Scottish voters turning out to make their feelings known and to cast that all important vote. That figure is way higher than the amount of people across the UK who turn out for regular electoral events, so it was inspiring to think of the passion that had inspired those votes.

Thankfully overnight, not once did the YES campaign ever gain the majority. It eventually settled on 55% voting no to independence. But I am glad I sat through and watched this momentous event unfold as it happened. I felt a sense of connection and great pride for our United Kingdom, this tiny little island that once ruled most of the world, letting the people who wanted to be heard have their say. If I had just woken up this morning and been presented with a result, I’m not sure I would have felt quite so emotional. It would have still felt like listening-in to a muffled conversation in the next room.

Alex Salmond very graciously summed up his acceptance of the verdict of the people with, “We shall go forward as one nation”. I liked that a lot.

Alistair Darling said ‘We have reaffirmed the bonds that tie us together. Let them never be broken”. I loved that.

David Cameron said he would work towards giving Scotland more power over their affairs, and similarly England, Wales and Northern Ireland would have more say over theirs.

Let’s see where we go from here with the bar set high with such a reasonable debate, gracious acceptance and amazing voting turnouts. Britain, together we are truly GREAT!

And finally, inspired by all the various people who made speeches after the NO result was announced, I have written a little poem.

The world watched on in wonder
As democracy played through
And though we couldn’t vote
Scotland, our thoughts lay with you

So, this is our United Kingdom
4 nations side by side
With focus on OUR future
Alliance beyond land divide

United We Stand is a  poem written by Ms Moem on the occasion of Scotland voting to stay a part of the United Kingdom, and no to independence.